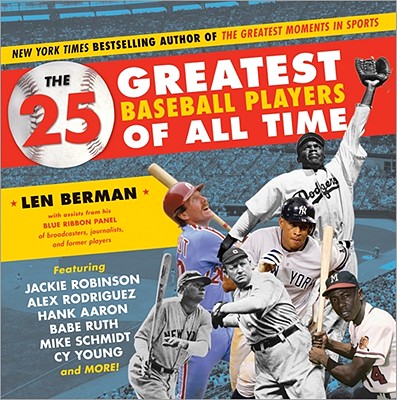 Discover the greatest baseball players of all time

Which guys playing right now will they still be talking about in 100 years? A-Rod? Pujols? How about Jeter?

Why do the best pitchers receive the Cy Young Award?

Who was this Babe Ruth guy, anyway?

Sportscaster and New York Times bestselling author Len Berman had lots of questions about the game of baseball. So he put together a group of experts that included all-stars, Emmy Award winners, writers, radio hosts, and enough World Series rings to fill one hand's fingers.

If you had to pick the best baseball players of all time, who would they be? Len Berman gave it a try, and asked a blue-ribbon panel-with experts including World Series champion Bernie Williams and radio host Chris "Mad Dog" Russo-to weigh in too.

Full of photos, facts, and fun, The 25 Greatest Baseball Players of All Time gives you the stories behind the names. Why do so many people love Babe Ruth? What makes Alex Rodriguez so great? Was Jackie Robinson as important on the field as he was off the field? Discover why Len Berman thinks the 25 players in this book are the greatest-then it's time to start your own debate

So who are the 25 greatest baseball players and why?

Praise for Len Berman's The Greatest Moments in Sports

"His writing is lively, humorous, and informative-just right to sustain kids' (or adults') interest...this is an excellent choice for anyone who is into sports." -School Library Journal

"Readers and browsers will enjoy paging through this compendium's stories and action-filled photos." -Booklist

"It's an eclectic roundup that's likely to have readers mulling their own personal favorites." -Publishers Weekly

Len Berman is an Emmy Awardwinning sportscaster who has covered just about every major sports event, including multiple Super Bowls, World Series, and Olympics during his 40-year career in broadcasting.

He is the creator of "Spanning the World," a monthly collection of sports bloopers, which was a 20-year staple on NBC's Today show. He is also the creator of Sports Fantasy, which aired on NBC and pitted regular viewers against famous sports stars.

He is the recipient of eight Emmy Awards and is a six-time winner, New York Sportscaster of the Year. His daily Top 5 email is featured in the Huffington Post and is received by thousands around the country. This is his fifth book.

A native New Yorker, Len graduated from Syracuse University. He resides on Long Island with his wife, Jill. They have three children. Visit Len at http: //thatssports.com/