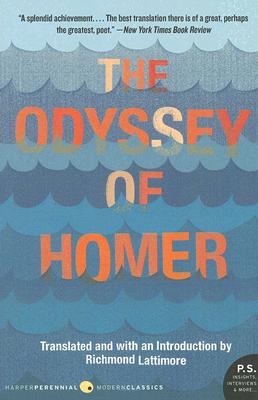 A classic for the ages, The Odyssey recounts Odysseus' journey home after the Trojan War--and the obstacles he faces along the way to reclaim his throne, kingdom, and family in Ithaca.

During his absence, his steadfast and clever wife, Penelope, and now teenaged son, Telemachus, have lived under the constant threat of ruthless suitors, all desperate to court Penelope and claim the throne. As the suitors plot Telemachus' murder, the gods debate Odysseus' fate. With help from the goddess Athena, the scattered family bides their time as Odysseus battles his way through storm and shipwreck, the cave of the Cyclops, the isle of witch-goddess Circe, the deadly Sirens' song, a trek through the Underworld, and the omnipresent wrath of the scorned god Poseidon.

An American poet and classicist, Richmond Lattimore's translation of The Odyssey is widely considered among the best available in the English language. Lattimore breathes modern life into Homer's epic, bringing this classic work of heroes, monsters, vengeful gods, treachery, and redemption to life for modern readers.

Title: The Odyssey of Homer